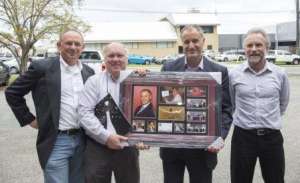 John joined Omnitronics as a software engineer in January 1995 and played a significant role in the development of the DX-64 Radio Management System which is now operating in hundreds of control rooms worldwide.

John’s significant efforts and management skills lead to his appointment as CEO in April 2004 and since then Omnitronics has significantly grown worldwide including the pivotal establishment of the USA office.

Thank you John for 10 years of dedicated service!